Kentucky Children’s Hospital is an integral part of UK HealthCare. The hospital provides unparalleled health care and pediatric services for thousands of children from central and eastern Kentucky. 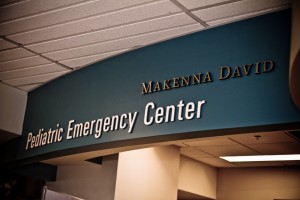 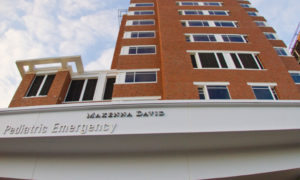 The Makenna David Pediatric Emergency Center is the only 24-hour pediatric emergency and trauma care center in central and eastern Kentucky, and the only one in the state verified as a pediatric Level I trauma center by the American College of Surgeons Committee on Trauma. It offers all the advantages of UK’s world-class emergency department, with a separate entrance and child-friendly waiting and treatment areas.

The Makenna David Pediatric Emergency Center opened its doors at 5 a.m. Friday, July 14, 2010. Michael Karpf, M.D., executive vice president for health affairs at UK, was there at 4:30 in the morning to greet the first two young patients at 4:50 a.m. By mid-afternoon the entire area was filled.

Before the center opened, the nearest facility for children was in Cincinnati to the north, Knoxville to the south, Nashville in the west or Pittsburg in the east.

“That’s a lot of real estate to cover,” Dr. Karpf said. He came to Kentucky in the fall of 2003 after an eight-year stint at UCLA in California and 16 years in Pittsburgh prior to that. “This center is now responsible for a lot of kids,” he said. “It’s quite special.”

The Makenna David Pediatric Emergency Center is one of the only dedicated children’s emergency centers. ”Dedicated” means that the waiting and treatment spaces for children are separate from the spaces used by adult patients, and they are designed just for kids. The caregivers in the Makenna David Pediatric Emergency Center are experts at working with children who need emergency care.

“A good medical professional is well-educated and trained and, equally important, has access to the best medical equipment in a setting that facilitates care,” Dr. Karpf said. “The supporters of the Makenna Foundation understand this. They have made gifts to purchase medical equipment and to improve our health care environment.”