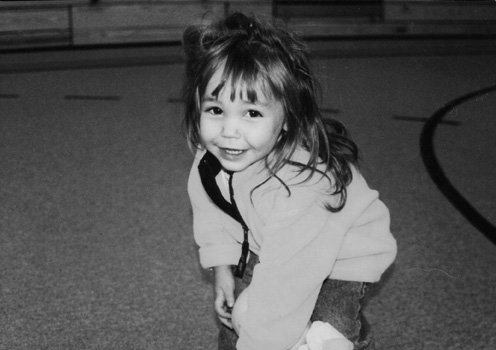 Makenna Lee David was born on April 4, 1997, to Sheila and Greg David in Lexington, Kentucky. Makenna was a wonderful child, full of life, love and energy. She enjoyed playing with her sister and brother, Kelli and Dayne, and brought joy to everyone.

In December 1997, at 8 months old, Makenna suffered a series of strokes and spent several weeks in the hospital. Medical experts from around the country informed the David family that their precious baby would likely not survive and if she did, she would never be able to care for herself. However, Makenna proved them wrong and made a recovery. She was back home with her family the Saturday before Christmas.

In August 1998, Makenna began experiencing breathing difficulties. In early November in search of a diagnosis, Makenna and her parents traveled to Houston. While she was a patient at Texas Children’s Hospital, Makenna visited a three-dimensional wall that proved to be a welcome distraction for her and the other young patients. Makenna found the wall’s brightly colored tiles captivating and fell in love with them.

After returning home in late November, Makenna was diagnosed with pulmonary veno-occlusive disease, a rare lung disorder. At the time of her diagnosis there had only been 125 similar cases and all had been fatal. On December 4, 1998, Makenna died—four months shy of her second birthday.

Although they were devastated at her loss, Sheila and Greg David remembered Makenna’s love for the tile wall in Texas. They wanted to build a similar wall of color and happiness in Kentucky, in Makenna’s memory. With the help of friends, they established the Makenna Foundation. In September 2001, Janice Mueller, owner of RE/MAX Creative Realty, presented Sheila and Greg David with corporation papers for the new foundation.

The Davids’ dream of creating Makenna’s Wall became a reality when it was unveiled on August 1, 2003, at the Kentucky Children’s Hospital. This vibrant piece of artwork is a huge mural of cheerful tiles, painted by local schoolchildren.

The Makenna Foundation has continued to grow and give to this wonderful hospital. A pediatric bronchoscope was purchased in 2003, and in 2004 funds from the Foundation helped to renovate the Children’s Sedation Suite. In 2006, the Junior League of Lexington renovated the Toddler Room in honor of the Makenna Foundation. The Makenna David Pediatric Emergency Center opened in 2010.

Feel free to contact the Makenna Foundation for more information.